What are Saved Mods?

Our Pro Saved Mods feature does exactly what the name says: it remembers your mod settings between gameplay sessions. When you have your mods configured the way you like, and Saved Mods is applied, you can pick up right where you left off with your settings just the way you like every time you play.

Toggle on Save mods next to the Play button on the game's page. Any mods you have configured will be saved and applied on launch every time you play. If you want to stop saving your mods for a particular game, simply toggle off the Save mods button for that game. This will require you to reconfigure all your mods from their off states every time you launch.

If you do not have Save mods enabled, you will receive a message asking if you would like to save the current configuration once you have exited the game. Selecting Yes will save the last mods that were enabled. 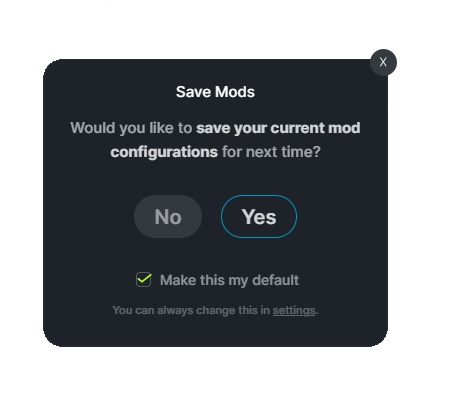 You may also set Save mods to On for all games as the default in your Settings.

What mods are eligible to be saved between plays?

Mods that cannot be saved usually require a prerequisite in-game action before the mod can be activated. These in-game prerequisites can be found in the mod's instructions. Auto-activating those mods on the game launch would result in an error and are therefore not eligible to be saved.

Was this article helpful?
Thank you for your feedback! Our team will get back to you
How can we improve this article?
Your feedback
Comment
Comment (Optional)
Character limit : 500
Please enter your comment
Email (Optional)
Email